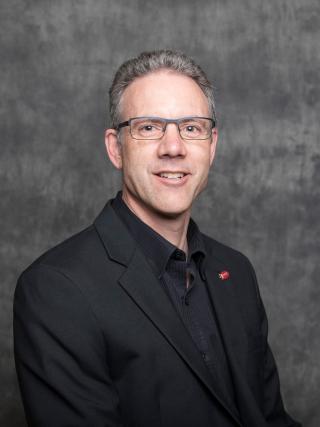 Born and raised in Alberta, Darrell Huether spent his early years in the rural communities of Beiseker and Sexsmith before moving to Lacombe to attend high school at Parkview Adventist Academy. Grade 10-12 at Parkview Adventist Academy was an excellent experience where he worked mainly at the furniture factory to earn money to pay tuition. Since Burman University (then: Canadian Union College) did not have a business degree at the time, he took 3 years of business before transferring to Union College in Lincoln, Nebraska for the final year; graduating in May, 1988 with a BSc in Business Administration with emphasis in Accounting and Management. During his time at Union College, he made 3 trips back to Alberta all with a car load of passengers and all straight driving. After one of these 24 hour trips, he interviewed within an hour at Parkland Furniture Manufacturing Inc. (PFM) and was subsequently offered a job as Scheduler. He also interviewed with an accounting firm in Edmonton and was offered a position but chose to stay out of the city and closer to his farming roots by accepting the job at PFM. While at PFM for three years, he moved from scheduler to helping with accounting and payroll. In 1991 he was offered a job at Burman University as Director of Student Financial Services and subsequently moved to the positions of Controller, Associate Vice-President for Financial Administration and eventually the role he currently holds, Vice-President for Financial Administration.

Darrell and his wife of 27 years have enjoyed the more rural setting Lacombe provides. Their children have experienced the excellent opportunities of Adventist Christian education in Lacombe and his daughter will be entering her second year in the BEd (secondary) program at Burman University and his son will be entering grade 9 at College Heights Christian School. While working full-time at Burman, Darrell enrolled in the part-time (4 year) MBA program at the University of Alberta in the fall of 2007 and completed in the spring of 2011.