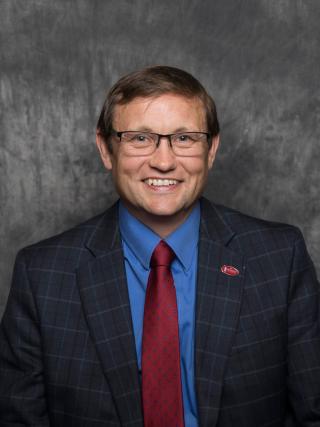 Dr. Agrey’s first sojourn at College Heights began in 1978 when he came to the high school division of Canadian Union College to begin his grade 11 year. When he graduated from high school in 1980, he began coursework at CUC to become a teacher. He went on to teach at Saskatoon Junior Academy, Chinook Winds Academy and Parkview Adventist Academy and then served as principal at Deer Lake Seventh-day Adventist School.

In 2010, Loren was asked to serve as President of Asia-Pacific International University in Thailand. Five years later, in order to be closer to family, he moved to Kettering College in Dayton, OH, to serve as Dean for Undergraduate Academic Affairs. In 2017, he returned to the Burman University campus to serve as the 25th president. His vision for Burman University focuses on growth, excellence, advancement, and student success.

Loren and his wife, Shelley (McCann) have been married for 34 years. They have four grown children; Jen (Matt), Auralei (Ryan), Ryan, and Regan (Raquel). They have also been blessed with three grandchildren; Elise, Eliana, and Ashton.